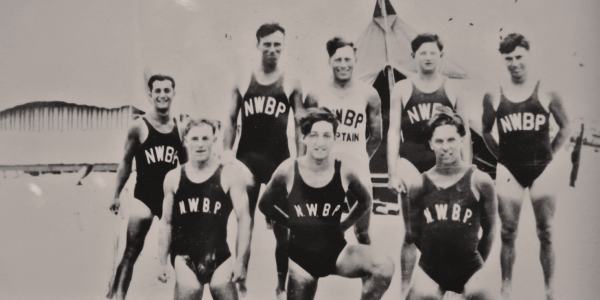 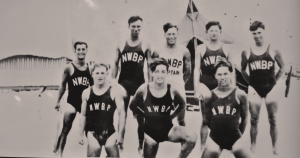 The North Wildwood Beach Patrol proudly celebrates its 100 th anniversary this summer. The beach patrol was established by Mayor Harry Hoffman in July 1914, during the last year of his three-year term. It is uncertain how many guards were on board during those early days (qualifications at one point included having something appropriate to wear). Showing how much times have thankfully changed, records on file with the Wildwood Historical Society state one of the most ordinary duties for lifeguards those days was instructing bathers how to clear tar, which had washed ashore from oil leaked from sunken tankers, off their feet. An ironic task given that the ocean was a main draw for visitors in town and drownings were becoming alarmingly more rampant. At the time, records state that 12 guards were paid $3.25 a day to keep beach watch or $50 a month. The pay was raised to $22.50 a week (a work week was 59.5 hours) in 1946 or $90 a month (low pay even for those times). The pay rate gradually increased by the 1960s as the work hours were reduced. Time passed and by the summer of 1965, nearly one million people flocked to the North Wildwood beach with the lifeguard patrol responsible for saving 164 lives that year. Gone were the days of worry over tarry feet. In its place ultimately came a healthy respect for the men (and eventually women) given the grand task of guarding lives. 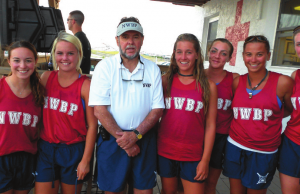 North Wildwood beach patrol Chief Tony Cavalier, who celebrated 40 summers on the beach patrol in 2013, remarked on the many changes the patrol has gone through in its 100-year history, from the quality of the rescue equipment to the accountability of the guards, who now need to be certified before they can enter the patrol. According to the beach patrol’s website, during their humble beginnings, lifeguards, who initially wore wool suits, used what was basically a tin can on a rope as a buoy, eventually transitioning to a buoy made out of cork and canvas before switching to fiberglass and rubber. They now use what is referred to as a torpedo, which is made of rigid plastic and weighs significantly less than the buoy but still maintains its diamond shape.

In 1986, the first female guards joined North Wildwood’s beach patrol; a mere 53 years after Wildwood made the national news for hiring two female guards. That number, naturally, has risen over the years, as the number of water fatalities has dramatically decreased thanks to advanced training, quality equipment and public education. Currently, the North Wildwood beach patrol has approximately 70 guards keeping our shoreline safe during the summertime, serving the city’s one and a half mile beach. Those lifeguards made more than 200 rescues during the summer of 2013. The patrol’s enhanced public safety record remains one of Chief Cavalier’s proudest achievements.

The patrol proudly hosts two summertime events, the Around the Island Tour held towards the end of August every summer, and the Beschen-Callahan Lifeguard Races, which began in 1969 to honor two of its members, Jim Beschen and Mike Callahan, who died at separate times in the Vietnam War. At the start of the races, only the Wildwoods and Cape May participated. Now, nearly every beach patrol in the country arrives with their own team. SAVE THE DATE! JULY 11, 2014

Plans are to commemorate the beach patrol at several events this summer season. In commemoration of the centennial, guards will receive uniform patches to mark the anniversary, one more symbol honoring a job well done.