The Beatles – 50 Years Ago in Wildwood Crest 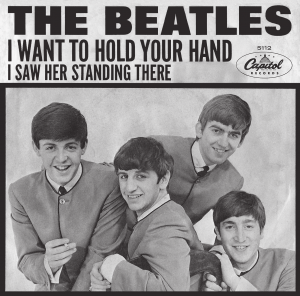 The cover of that very first Beatles record I bought,
in early 1964

BY KIRK HASTINGS
February 9, 1964, is a date, to loosely paraphrase President Franklin Roosevelt, that “will forever live in infamy”.

It was at 8 P.M. on that particular Sunday evening, many years ago now, that I sat down with my mother in Wildwood Crest (I was 11 years old at the time) to watch “The Ed Sullivan Show” on Channel 10 (CBS-TV) out of Philadelphia. My older sister Jill was away for her freshman year at Douglass college in New Bruns- wick, New Jersey, and my older brother Harry was at some friend’s house (where they had all gathered to watch the same program). My father wasn’t around that particular night, as he worked as a tugboat captain in Philadelphia, and often spent days away from home.

Of course, in those days whether you even saw a particu- lar program on TV or not was sketchy, as it was pre-cable days — and whether your rooftop TV antenna would get a clear signal from Philadelphia or not depended on the weather (mostly the direction of the wind).

I wasn’t much into music at that time (yet), but the buzz around Philip P. Baker Elementary School and the Crest Memorial School was that there was going to be a musi- cal group on “The Ed Sullivan Show” that night that was going to be “The Next Big Thing” — and everyone was talking about it. My mother pretty regularly watched Ed Sullivan every week, so it was likely that I would end up seeing this new group. 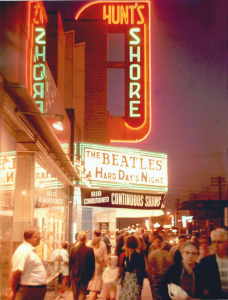 A Hard Day’s Night at the Shore Theater in Wildwood, during the summer of 1964.

Fortunately, my mother and I did end up witnessing that historic TV event. The weather that night was okay, the wind was right, and we could get a fairly clear signal for Channel 10. Sullivan introduced the group, and they started their first song set with “All My Loving”, followed by “Till There Was You” and “She Loves You”. They came back in the second half of the program with performances of “I Saw Her Standing There” and “I Want To Hold Your Hand”.

I remember liking “I Want To Hold Your Hand” in par- ticular. I ended up buying a 45 copy of it soon afterward (my first record purchase ever!), and the record was complete with a nice picture sleeve of the group on it. I bought that record, and all my records as a kid, from a small record store that used to be located just around the corner from Jackson’s Drug Store in downtown Wild- wood, on Oak Avenue. I remember playing both sides of that record over and over again, and liking it more each time I played it. (I still have that record today.) Shortly afterward, I ended up buying copies of “She Loves You” (backed with “I’ll Get You”, on the Swan record label) and “You Can’t Do That” (backed with “Can’t Buy Me Love”). I still have both of those records as well

The very first Beatle record I remember hearing played on the radio? “Do You Want To Know A Secret”. Other early favorites were “P.S. I Love You” and “Love Me Do”. My mother loved music, and the radio was always on in our house while I was growing up. Thus I vividly remember each new Beatle single as they came out dur- ing the 1960s, as they all received constant promotion and airplay from the moment they became available. The main radio stations in my house were WOND 1400 AM in the mornings (before I went off to school), and WMID 1340 AM in the afternoons. Bob Weems was the morning DJ on WOND, and Steve “Boom Boom” Can- non was the afternoon DJ on WMID. The radio usually went off when evening came around, as the signals would gradually fade out. Then it was time for the TV to come on!

My older sister, home from college, took me to see the film “A Hard Day’s Night” when it came out during the summer of 1964, at the Shore Theater in Wildwood. She also took me to see “Help!” the following summer (again at the Shore). To this day they both are still two of my favorite all-time movies.

Today I now own a DVD copy of that very first Ed Sul- livan Beatles program originally aired on February 9, 1964, and my wife and I sat down to watch it on the evening of February 9, 2014 — exactly 50 years later.