I love to collect postcards of the Wildwoods from the early 1900s, including many postcards of houses of worship. The Catholic churches of St. Ann’s and Holy Apostles are of particular interest to me because my family attended Sunday services for many summers before we moved to Wildwood Crest, coincidentally around the time that the Church of the Assumption opened.
I became curious when I noticed two very old cards of two different white buildings identified as St. Ann’s. I also noticed that St. Ann’s Church on Atlantic Avenue had changed names in the past.
Based on research in the Wildwood Historical Society, including the book A Century of Memories 1912-2012, I learned that the first church building of St. Ann’s was located on the northeast corner of Roberts and Holly Beach Avenue (present-day New Jersey Avenue). The first service in Holly Beach (which later become part of Wildwood) was held on September 5, 1897. The church was moved to Garfield and Pacific Avenues in April 1903. 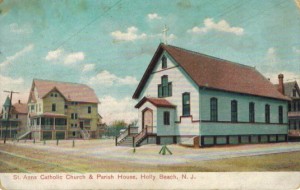 By 1907-08, the parish outgrew the church building, and a new church and rectory were built on Pacific Avenue between Glenwood and Magnolia. 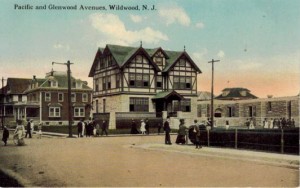 In 1926 a second floor was added to the church and became St. Ann’s School. Rectory is on its left. Publisher Geo. E. Mousley. Circa 1933
From the Chris White Postcard Collection
The church on Pacific Avenue outgrew its space once again, so in 1919 a new church was constructed on Atlantic Avenue between Glenwood and Magnolia. It is this postcard of a white building with an orange roof, “St. Ann’s Auditorium, Atlantic Ave, between Glenwood and Magnolia Aves.,” that prompted me to continuing searching for what happened to this buildling.
I discovered that in December 1929 the first St. Ann’s Auditorium burned to the ground. 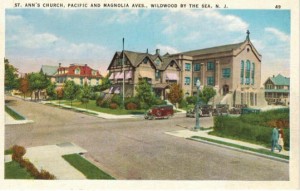 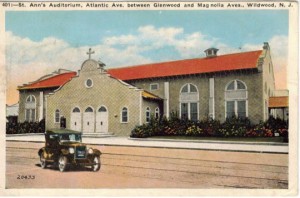 Publisher Tichnor Bros. Date unknown.
From the Chris White Postcard Collection
Bob Bright, Jr., a former historian of the Wildwood Historical Society, often told the story that the new church building was completed in several months time, largely due to the hiring of many unemployed bricklayers and other construction workers in Philadelphia and elsewhere who had lost their jobs because of the stock market crash in October 1929.
In 1943, St. Ann’s Auditorium was renovated and redecorated, including new stained glass window depicting the twelve apostles; its name was changed to the Church of the Holy Apostles.  In 1955, the church became a year-round house of worship after heat was added, and its name was changed from Church of the Holy Apostles to St. Ann’s Church. So that explains why there are postcards that depict the same church building on Atlantic Avenue but with different names over the years! 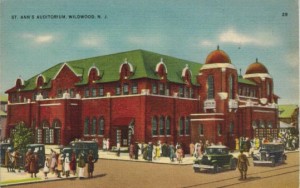 Church of the Holy Apostles (formerly St. Ann’s Auditorium) Publisher Lynn H. Boyer. Early 1950’s.
From the Chris White Postcard Collection
Since 2010, St. Ann’s and the Church of the Assumption in Wildwood Crest now comprise Notre Dame de la Mer Parish (Our Lady of the Sea).
It wasn’t until I started collecting old postcards that I became aware of the various changes in the names and locations and actual buildings of St. Ann’s. I was surprised to discover some of the reasons why. You never know what you’ll learn when collecting old postcards. 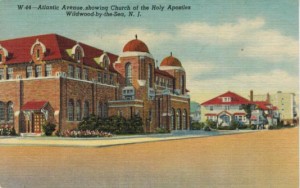